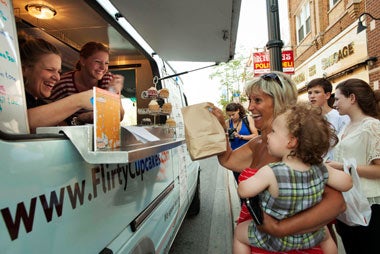 Food trucks have been around for decades. The fact that it is getting a lot of the spotlight now just means there are more people talking about them. It was as recent as 2008 that food trucks began to make an impact on the social network because of a few upscale food trucks that suddenly burst on the scene.

Remember movies like “Flash Dance?” That 1983 film had a scene with a grayish, rather boring-looking food truck that was located on the construction site. Did anyone pay attention to that truck? If that truck looked anything like Kogi BBQ does, it would have outshone the actors in the scene, right?
Aside from Kogi BBQ in Los Angeles, Rickshaw Dumpling NYC also opened up for business in 2008 and these two guys started a new food truck revolution – gourmet style! People were lining up patiently to buy food from these guys and their success caused a mad scramble for others to get in on the action. Even the government began to work feverishly to establish local rules and regulations on the operations and trafficking of these food trucks. Within the year, all food trucks were required to get health permits along with other pertinent city permits. They were also heavily regulated as to operation hours and location.
Other interesting facts about the food truck business:
•    Monday is usually the busiest day
•    You can start a food truck business with as little as $40,000
•    The best way to check out the competition is by looking up their social media accounts
•    In some areas in Nevada, food trucks have to move every 30 minutes to a different location
•    In NYC, food trucks cannot park in areas where there are parking meters
•    Many restaurant owners dislike and fear food trucks because it threatens their business which is why some of them have decided to put up their own food truck branch
•    However, 54% say that if they did not buy from a food truck, they still won’t dine at a brick and mortar restaurant but eat fast food restaurant
•    Loyalty is beefed up if the servers and employees of the food truck are pleasant, willing to chat awhile, and friendly
•    Food truck business owners who use social media platforms like Twitter and Facebook generally get more customers
Also interesting is that the food truck industry is helping other businesses thrive like those who offer vehicle wraps which has experienced a hike from 20 to 40% in revenues and those who offer customization services for food trucks kitchens.
In a way, you could say that the food truck business, however nondescript and ordinary, has stepped out of the shadows and became one of the country’s lifesaving economic miracles.