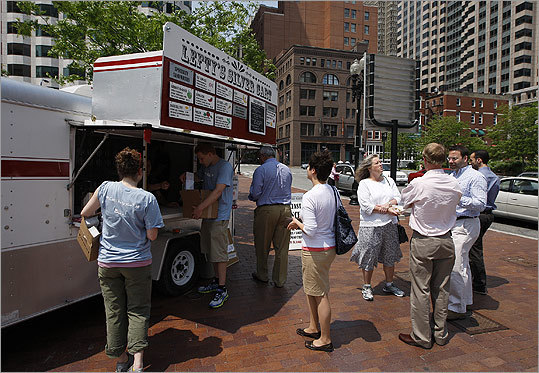 Boston is a great place to be if you’re in search of new food trucks ideas or some of the best food trucks in the country. In 2011, there were only 8 food trucks during the first Food Truck Festival but a record number of Bostonians came to sample the food. Over 4,000 people were milling around these 8 trucks and some of them decided to join the businesses.

Today, there are over 200 food truck businesses in Boston and the Food Truck Festival has never been more popular. In 2012, they have hosted 7 festivals each one more successful than the last.

Some of the more popular food trucks in Boston are Boston Super Dog, Roxy’s Grilled Cheese, Bon Me, Jamburritos Cajun Grille, and Lefty’s Silver Cart. The overall concept in food trucks for Boston is either classic food done extremely well or something new and delicious like the Vietnamese food from Bon Me or the vegetarian sandwiches of Lefty’s Silver Cart.

The Boston Super Dog has a wide following and many of their loyal customers will swear loudly and with extreme conviction about the lusciousness of the dogs.  However, the hotdog sandwiches are not cheap but definitely something worth buying again and again. It is found in an industrial area which can be difficult to access because of the number of trucks that park there. It was originally called Speed and the creator of the hotdog recipe was 90 years old at the time the Speed food truck business started. He eventually sold the business to his manager who was responsible for changing the business name.

Jamburritos Cajun Grille Express is owned by Chef Brown and the food truck is usually around during the Food Truck Fridays or plying the streets of Boston. The specialty is the jamburrito which is affordable, loaded with flavor, and very addicting. It isn’t a food truck for kids but adults love it so much that latecomers would race to catch the truck as it drives away.

Getting Tipsy From Food Trucks?
Welcome To Another New Cyber Craze: Food Truck Apps
Google Vs Mobile Food Pantry and their Take on Food Trucks