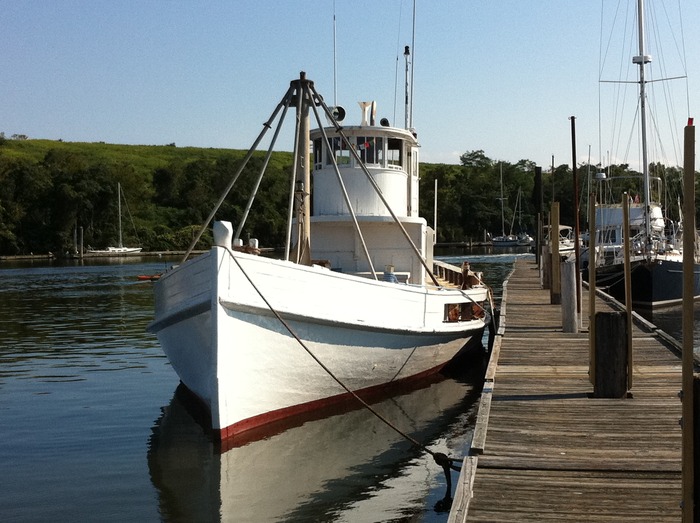 A floating food truck, Oyster Float is currently being worked in Long Island. It is the legendary 1891 “Laurel” oyster boat known as America’s oldest. This boat carried seed oysters to Peconic Bay from Connecticut for many years and is now owned by Jean Paul Vellotti. His plan is to continue the run but as a floating food truck once the restorations are complete.

Vellotti calls himself an accidental oysterman when he decided to buy the boat two years ago during a typical work day.  The boat was actually scheduled to be destroyed by its owner which tipped the decision to buy the vessel. Vellotti is a professional photographer and was a photojournalist and editor for 20 years. He already has a schedule for the Oyster Float that includes participation in the 35th Norwalk Oyster Festival in September.

Some of the work being done on the boat is replacing the decade-old deck and repair the leaks. It’s an astronomical task but he feels he is equal to the task having some maritime experience and a love for rebuilding almost anything under the sun. The cost is tremendous which led Vellotti to start accepting donations through crowd-funding at the Kickstarter website. Investors will be given a piece of the original wood from the Laurel shaped into unique wood crafts like picture frames. The first 250 investors will also get their names carved on the new deck as an everlasting reminder of who helped make the Laurel seaworthy again.

The Oyster Float will be serving more than oysters and will be cruising through the same route it did some 100 years ago.  The plan is to have a local chef serve farm-to-table dinners on deck with a regular cocktail hour all for very reasonable prices. The cruise will start from Saugatuck before heading to Southport, Norwalk, Port Jefferson, Northport, and the Great Peconic Bay. You might even get to see it on Pier 19 once in a while. The Laurel’s base will be at Westport if all goes according to plans and the Planning and Zoning office allows it After all the Coast Guard, fire marshal, and health department have all given their hearty “Yes!” to the project.