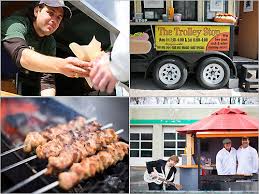 The City of Boston has approved its 2013 program for food trucks and 56 new food trucks are now allowed to offer their goodies in Boston’s streets.  Compared to 2 years ago, Boston had 4 times less food trucks so the choice this year is going to be amazing.

The city council has approved food truck permits for an incredible gastronomic experience for Bostonians and visiting guests. Almost if not all food cuisines and combinations are going to be available. Walking the streets in Boston is definitely a food trip you are not likely to forget in months.

The full 56 fleet of food trucks hit the streets of Boston last April 1 and were seen all over from Copley to Dewey Square. There are 18 sites that have been assigned as food truck territory with a maximum of 3 food trucks per location. Some of the food trucks sites to visit are Dudley Square, East Boston, and Charlestown.

Biryana Park is Sri-Lankan vegetarian cuisine while Sweet Tomatoes is a pizza brick and mortar chain which decided try launching their own food truck. Area Four is another brick and mortar with a new food truck which really is a clear sign that brick and mortar restaurants are starting to throw in the towel and join the party!

One other interesting launch will be the craft beer in cans which is a product brewing with local beer company, the Sly Fox Brewing Company located in Pennsylvania. The beer is called a topless beer because its packaging has a unique solution to it and has spawned the nickname the 360 Limited.

Also, don’t forget that the Rose Kennedy Greenway Conservancy has its own food truck program known as Greenway Mobile Eats. Their 2013 program offers 22 food trucks and food bikes in 6 different locations in the Greenway. Last year, they made quite a bundle with an increase of 74% from 2011 sales and are expecting a banner year again this 2013 with estimated earnings of about US$ 260,000. How’s that for grand income spikes from a low $26,000 in 2010!